The organisation hosted its annual Lecture and Luncheon at the new location at the Museum of Brands, in London, attended by the great and the good of the health food industry.

Dr Michael Dixon presented the Jack Noah Memorial Lecture, offering a fascinating look at the matters around social prescribing, how it is being developed at quite a pace and the future opportunities that lie ahead for the health food trade. 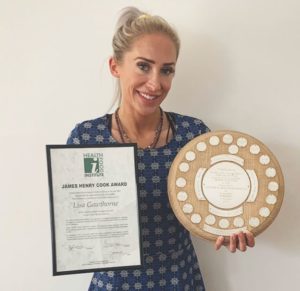 In addition to the lecture, the annual HFI awards were announced, with Lisa Gawthorne, Co-founder of Bravura Foods, awarded the James Henry Cook Award.

The award is given annually to a person or company whose personal or business ideals most closely conform to those that of James Henry Cook, who established Britain’s first health food store in 1898.

Lisa was selected for her inspiring support of the vegan principles in the food industry and in sport, and although she couldn’t make the ceremony as she was competing in the European Duathlon Championships with Team GB in Romania, she sent a video thanking the HFI for the award.

Lisa said of the award win: “I am over the moon with this, it really means so much to me that people thought of me as an inspiring nature with all I strive to do in the market and in outside business in sport. Bravura has grown to be a great collection of unique vegan brands and fantastic people and we have amassed such a loyal following across all our categories. The health food industry continues to play a pivotal part in all that we do so the fact I was nominated by this sector is even more special.”

The HFI also announced its annual Fellowships, which were awarded to eight people, including Phil Costigan, from the IHTA, Health Food Business Editor, Rachel Symonds, Emma Ellis, Managing Director at BioCare, and Stephen Desborough, from Food for Thought.

As part of the anniversary celebrations, Target Publishing created a special anniversary magazine, looking back at the 40 years of the organisation. As part of that, Target donated a percentage of advertising revenue back to the HFI.

Have you booked your place?

Pukka for the planet